Girls in the refugee settlements have been affected by lack of economic resources, early marriages, early pregnancies, lack of role models, or the view of schools as unsafe environments. These reasons have in many occasions hindered girls from attaining their learning outcomes. In response to the predicament faced by girls in the refugee and host communities’ settings in Kalobeyei, Africa’s Voices undertook a community engagement and mentorship activities anchored on interactive radio programming to provide life skills through positive modelling and mentorship approaches.

With support from Windle International Kenya (WIK), AVF carried out detailed interviews and recruited mentors who had a good understanding of child protection guidelines and expertise to positively engage the young girls. The mentors guided the girls in developing their confidence to be able to speak for themselves while boosting their understanding of their rights. The social mentors were experienced social workers who have worked on projects in the same locations aiming at empowering girls and advocating for equal rights for both boys and girls.

The mentorship approach was aimed at building girls’ (12-17 years) knowledge of the risks they are exposed to, and build individual and collective efficacy in protecting and standing up for themselves. The mentorship aspect also guided them to undertake different forms of activities to help them stay positively engaged as they go through education. Through meaningful interactions, the sessions guided girls towards building life skills and making informed choices as they navigate everyday life in their community. The mentorship programmes also provided a space for mentors to facilitate follow up discussions that not only contributed to content creation for the weekly shows aired on BINTI IMARA programme on REF FM but also enabled girls to share different thoughts on issues affecting them.

To understand the impact of the mentorship programme, AVF interviewed some of the girls who took part in the programmes. AVF also interviewed boys who were part of the listening groups. The ones selected for the success stories were the ones whose contributions during the radio listening groups were most significant.They were also most interested and willing to share their views.

The selection was done with the help of the mentors and parental consent was sought before seeking consent from the girls. The names have been replaced with pseudonyms so that the participants are not identifiable.

The participants who consented were interviewed by the mentors and their views recorded. These were later transcribed by AVF and translated into English to come up with the report.

The mentorship program has contributed to the knowledge of girls about their rights as well as their efficacy on decisions that affect their lives. The mentors also played a pivotal role in equipping girls with skills and knowledge they need on a day to day basis to counter some of the stereotypes and negative cultural norms hindering girls’ access to education and some of the challenges they face to be able to attain their goals in life.

Jane, a 14-year-old grade 5 student at a primary school in the area was one of the beneficiaries of the mentorship sessions. She is a Congolese refugee. Jane confirmed that girls in Kalobeyei face a lot of challenges. She mentioned the issue of girls being harassed by boys and the unintended pregnancies that they get mostly as a result of poverty. This, she mentioned, is always more common when the schools are closed. She directly linked the early pregnancies to the rampant poverty in the community that leads to their inability to afford basic needs such as sanitary ware, under garments and uniform.

Poverty and lack of basic needs still push a number of girls into early pregnancies and consequently dropping out of school. The parents, however, have a big role to play since most girls depend on them for provisions such as sanitary pads, school uniform or school fees. When parents are unable to provide these items, some girls seek them out from others and in the process some get raped and subsequently they become pregnant.

Others say when they ask from their parents they do not get it hence they go out and get pregnant while looking for such items.

Life in the camps is difficult. Others say when they ask from their parents they do not get it hence they go out and get pregnant while looking for such items. Others have not gone to school. Whenever they ask their parents to go to school they are told the teacher will beat you because they do not have a uniform or others will make fun of you. That is why girls turn to other vices and there is also a lot of cases of rape in the settlement.

The mentorship sessions made Jane more motivated and now she believes that when she goes home she will be resourceful to her peers. She says that with the new knowledge, she is now able to share with other girls so that they can also be confident girls as they pursue their studies.

Jane however mentioned that in future, the organizers should provide sanitary items since their needs are many and they cannot afford all of them with the little amount of money they have. Most of the parents use their cash transfers (bamba chakula) to buy for their daughters basic necessities such as sanitary pads but still the money is not sufficient.

We need girls’ sanitary materials. If they are included the girls will be more motivated to attend the training and mentorship programmes.

However, the challenge remains in helping parents understand the importance of education for girls. Jane regrets the fact that some parents contribute to these vices by not supporting their children especially in regards to availing to them basic needs such as sanitary materials and uniform to continue with their education. She thinks there is a need for them to avail a uniform and motivate their children so that they can stay in school and complete their education.

Disclaimer: In accordance with AVF’s data protection policy all names used in the case studies are pseudonyms and not real names.

Now that we have finished the mentorship programmes, when I go home I will help other girls. As girls we always tell stories and discuss amongst ourselves. Myself with the information I have been taught, I will be able to share with them,impart on them and from that they will be upright and confident girls.

Jane, Grade 5, 14 years
Speaking on how she intends to benefit other girls with the education acquired during the mentorship 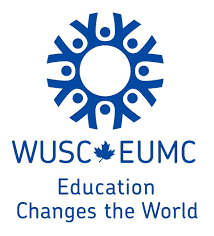