Since 2015, we have been partnering with UNICEF Somalia to leverage interactive radio as a tool for remote monitoring and timely citizen feedback — helping to amplify the voices of widespread communities.

Our initial eight-week pilot gathered SMS data on radio audience beliefs and practices related to polio and routine vaccinations, and maternal and neonatal and child health. Over 8,400 people participated by SMS from all provinces of Somalia: 44% were women, 86.4% were 15-29 years old and 54.9% were parents.

Throughout 2016 and 2017 we expanded the health-themed interactive radio shows – responding and adapting to UNICEF’s priorities. Currently, we work with MediaINK to broadcast on 27 radio stations which cover 50% of territory across 60 districts in Somaliland, Puntland and South-Central Somalia, and potentially reach 70% of the population. Shows regularly attract over 6000 participants a week.

For the initial pilot, our analysis revealed insights on barriers to health behaviours: 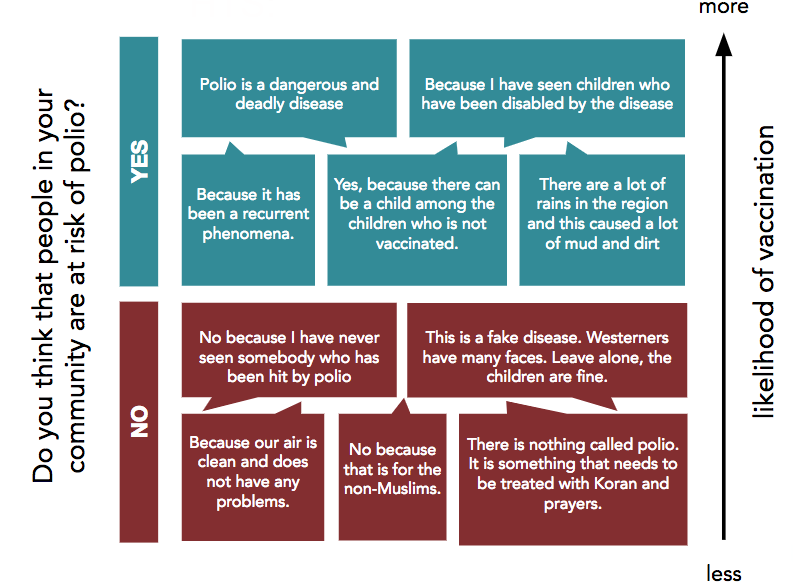 Further results of the radio audiences’ answers are presented in our online interactive dashboards and report.

Working with various sections at UNICEF Somalia, we have gathered and analysed data on the beliefs and practices of Somali people related to the following health topics:

An engaging and digestible insight into our partnership with UNICEF Somalia.
ENTER

Using innovative techniques … such as interactive radio shows to broadcast information and gather audience data, we managed to go beyond our regular programming.